Gun Moll by Bethany-Kris
My rating: 5 of 5 stars


4.5 "their love will be stronger than the mafia rules" stars


A man is nothing without his woman...


Bethany- Kris never disappoints and now she has teamed up with Erin Ashley Tanner and they doubled the thrill.

They both gave us a strong, bold, brave heroine - Melina Morgan , she's a survivor. That’s just what she does. She’s independed, she knows what to do to keep her safe and get things done. And she's not afraid or reluctant to do it. And she doesn't trust anyone.


So when things come to push and shove and she finds herself in a situation where she can't get herself out of on her own, she needs to put faith in the man, the type of man she would never rely on.
James “Mac” Maccari


He was arrogant and too cocksure.
He had a smart mouth.
But he was also sexy as hell.
Hazel eyes and brooding face.


A soldato that wants to be noticed enough to get Made in the Pivetti Crime Family, burdened with his own past (failer of a drunken father) he wants to make it beyond the name he's carrying. But it seems his Capo has hidden intrests and is keeping all Mac's work hidden from the „BIG BOSS“. But the chain of events will push both Mac and Melina in Pivetti's boss sight and it will force them to fake a relationship, to keep them both safe, Melina from the mafia and the police who suddenly have their own agenda and are stirring muddy waters.
Mac provides the necessary shelter to Melina by pretending to be in a realtionship.


There was something between her and Mac and it was dangerous.


Mac had unleashed something inside of her that she thought she'd never feel.
Want.
Lust.
Need.


Melina soon gives up her icy and bitchy posture and lets Mac in…and he takes over, he takes control to claim but also to make her safe, by making her his, he just takes layer after layer of her selfcontrol and high erected walls.


You see, you might like to be the queen bitch in the room, but I get the feeling that somewhere inside you, there's a woman who would die to have an assertive man take control.


the danger lingering above them turns serious and very real…and there's no time to dwell upon further action, action that will make them both united and noticable. Stronger. Bolder. Together.
And Melina just might prove to be that one turning point.
His GUN MOLL.


Melina was born to be a mobster's girl, even if she didn't know it. The woman could handle a gun, kept a calm head in bad situations, and wasn't afraid to get a little dirty.
That had „gun moll“ written all over it. 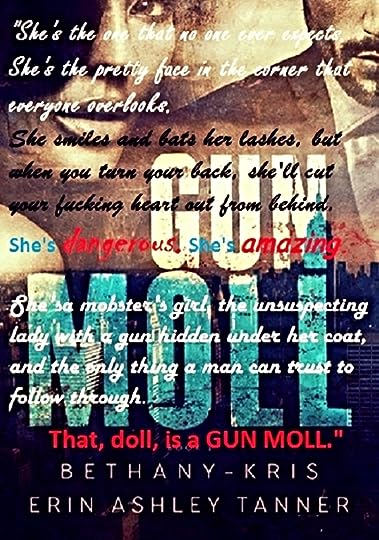 Excellent writing, interesting plot and a fantastical build up between the characters guarantee a pleasant and enjoyable reading material.

and I still call


I am guest starring on my dear friend EBRU blog...so you can freely check that out! *wink*

View all my reviews
Posted by Snjezana (Snow) at 10:27 AM