Dark Notes by Pam Godwin
My rating: 5 of 5 stars

Pam Godwin was the author I've always wanted to read but couldn't find the time to. When I heard her new books, Dark Notes, I was on the cloud nine. I made up my mind to start reading her with her latest release. And then, I saw Dark Notes was forbidden romance between teacher and student. So yeah, I was sold.
I've been thinking for hours how to write a review about this book. I'm afraid my review will not do the justice to this book. But, I'll try, really...

Ivory Westbrook was seventeen years old girl who lost her father three years ago. She lived in Treme with her so-called-brother and so-called-mother. At the age of seventeen she's been through so many things.
Things that will make the person bleed inside out...Things that will make the person weaker everyday.
But Ivory was different. She was the living form of "what doesn't kill you make you stronger." 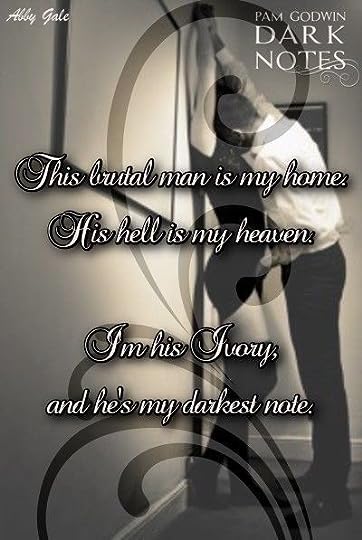 Ivory Westbrook was strong. She was determined, hopeful. She lived her life with a simple motto:


Even though she was poor, abused, lack of affection, lack of love she was standing tall on her own feet. She was innocent in the filthiness around her. And she walked with straight spine, chin-up, eyes ahead. She kept her secret smile on her face with each step she took in the school hallway.

She stands out among everyone in this school. Not because of the drab style of her white button-up and tattered black skirt, but she shines above her financial limitations, radiating the kind of beauty that can't be bought. Everything looks lackluster in comparison to the glow of her skin, the brightness of her eyes, and the potency of her aura.

Emeric Marceaux was a young music teacher in the Le Moyne. His intention was so much different when he came to the school. The only thing he thought was to have his job. But even in the first day, his plans were jeopardized by a forbidden, young and beautiful girl. 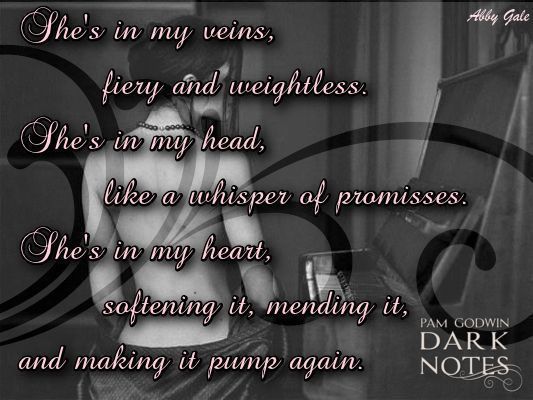 They were captivated by each other.
Their sexual tension was enough to set fire with one gaze. Ivory's sexuality had woken up with Emeric's dominance, honesty and his kinky way of teaching her the painful pleasure. And Emeric was drawn to her. Because Ivory's feistiness was his fuel. Her obedience was his fire.

They were a timeless concerto, together. They composed their own materpiece. A song that will never end.

Dark Notes looks like a steamy forbidden romance at first glance. It is...But it has so much more than that. It is about keeping the dreams no matter what the situation is. It is about being brave enough to face with life.
Dark Notes is about the Ivory's story of finding herself, figuring out her dreams and experiencing the pleasure over pain.
But mostly it is being strong enough to hope. Brave enough to tattoo your hopes on your skin. Believing in "Someday My Prince Will Come."

I fell in love with Emeric.
I was in awe of Ivory's strength.
And I was bewitched by Pam Godwin's talent of storytelling.
This book was hard to put down. And even if you can put it down, you won't be able to stop thinking about Mr. Marceaux.
Hottest Teacher Ever!

Advance Reading Copy is generously provided by author, Pam Godwin, in exchange for an honest review.

Be first to know via e-mail