SNATCH: A Dark Erotica by Scott Hildreth
My rating: 4 of 5 stars

4 "You're going to die anyway" Stars

My third read by Scott Hildreth was so much different than the first two. And it was good different...As a thriller book lover, I'm always interested in these kinds of stories. Snatch was indeed a thriller, a psychologic thriller.

Ryan Capshaw studied Psychology. He was interested in human mind, how it works and what affects the decision process. He was also interested in death, the idea of death and survival.
Not a good combination, right?

Ryan Capshaw was intelligent, determined, hungry for success and money, confident -on the surface- and pretty good-looking. With all of his attributes, he was charming, charismatic and intriguing.

The other side was totally another story.

Snatch showed some people were broken, more than others, but even those broken pieces were meant to find each other to create something twisted. 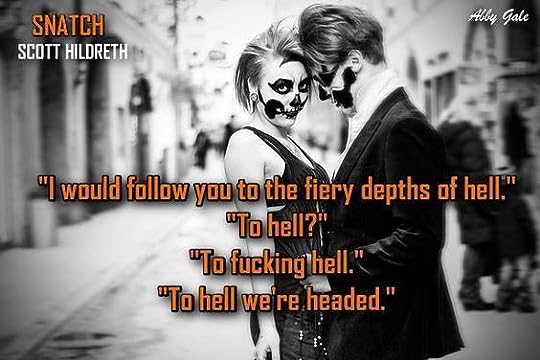 Snatch was a good read. It was twisted, dark. It had good amount of sex. The storyline was intelligently molded and put together.

Then why I gave 4 stars to this book?
Because in some parts I wished it had more inner thoughts. I wanted to understand the reason of some particular actions. It was unexpected, for sure, but I wish I could travel in the mind of madness more. That's why it left me with a few questions.

But beside this little disconnection(in my part), I truly enjoyed reading this book. And I recommend it if you don't look for a romance. If you want to read dark, intelligent read and if you want to travel into madness...Here is the book for you.

Don't be afraid to read it,


Fuck it, you're going to die anyway