Desperately Seeking Epic by B.N. Toler
My rating: 5 of 5 stars

This rarely happens to me, not being able to write my feelings down…it usually works just fine, almost like a compulsive disorder, it's like my hands are typing on their own secret language with a secret connection to my brain…but right now...
In the process of writing this I am a mess.

BN Toler's books happen to have that kind of effect on me. Every time.
And this book is no diferent.

Desperately seeking Epic…a story one can't just sum up in a few sentences cause one might miss smth important out and not give this book justice.

A story that starts out with a pleading add of a search, displaying a plead of a dying 12 year old girl who seeks a man called Epic, who happens to be her father whom she never met. She's desperately seeking for him before it's too late, for her…and for him. Paul James also known as EPIC for his stunt work had no knowledge of any of this, his return home after 13 years of absence will turn out to be the unexpected chapter in the greatest story ever, called LIFE.

And this is how I became involved with a remarkable young person, Neena, a girl with a strength of a Goliath, who will make her dying wish come true…that would too, end up being her EPIC adventure by bringing two people who love each other back together again. Uniting them through pain, tears, laughter, passion and desire for life and love. As her add becomes a global phenomenon, a few highschool students make their mission to pass on the story for Neena, to honor her with a last „insight“ into her own life, how she became to be…

Clara Bateman and Paul James became business partners of a SKY HIGH -skydiving business by fate, I would say.
Clara was a young woman who needed a change in her life – after the misfortune of losing her parents in a drunk driving accident, she grew up into a fierce woman in so much need of love, she was in a marriage that didn't work out and she felt betrayed and unloved and alone again. So the sudden inheritance of a 50 shares of a skydiving business, she knew nothing about, meant a life savor, a perfect opportunity to start over!

Paul was an adventureur, an ex stuntman for the movies who accepted his uncle's other half of the business after his injuries prevented him to continue with the hazardous work. He's a resteless soul in need of an adrenaline, excitments, he's a soul without roots…he's the untamed spirit always in pursuit of freedom...


Settling down meant losing my freedom, and my freedom was too precious to me. I needed to be able to pack up on a whim and hop a plane to Brazil, or anywhere, if I felt the need.


He was self-absorbed, self-assured, a player, and an asshole by default...


"I dont do babies and white picket fences."
Paul James is one of the most selfish men I have ever known


They both started off on bad terms, fighting, yelling, not giving in, and the staff working with them gave Clara hell, never quite making her welcomed, especially Marcus, Paul's best friend and confidant...
BUT still, they were the opposites attract...


With Paul, it was day to day. Some days we got along just fine, others he thought I was a raging bitch and I thought he was an entilted asshole.
We were so weitrd together then. We started off enemies. Then we called a truce and proclaimed peace in the name of our business partnership. Were we besoming friends now?


After hard start, they slowly got passed their issues and developed an understanding that turned into a slow friendship that eventually blew up in passionate flames that had to be extinguished.


That night, we clawed at each other, fingers digging into flesh, desperate, hungry for mor. I wanted to soak her in, absorb her, take every drop of her. For every bit I gave , she met it with just as much gusto. It was beautiful.


That passionate relationship where „those three little words“ were never spoken but were lingering around them abruptly ended over a misunderstanding, over a note that held Clara's thoughts of one random desperate longing and whishful longing that were never meant to be seen by anyone...BUT those words set Paul's restless spirit into a run...a 13 years long run


Forever.
Baby.
They were two potent words that I wasn't sure, no matter how much I loved Clara, I could give her. I needed freedom and adventure. And I couldn't promise her something I couldn't give. I wasn't built that way. I just wasn't. Maybe with her, the idea was easier to swallow, but I wasn't ready for even the idea of it.


Without goodbye, without a note, wothout a word.
Surely a dick move.

Clara's world turned upside down and one moment that left her shaterred again and alone brought her another huge change and the greatest gift of all...Neena.

The parts of Clara and Paul's past are interwoven with the current lives of Neena,Clara and Marcus...and after Paul's finding out that he has a daughter...and that his daughter is dying...those lives become even more intangled since there's so much to lose and so little time to feel, experience, to hold onto...

Paul is actually a different man after this acknowledgment and he sets his goal, he turns his whole world towards that little girl whose destiny was unfairly written...
She becomes his center of the universe, while along his dormant feelings for Clara burst out with each encounter, with each worry, with each struggle they try to fight off in fighting the unevitable odds in the game they can't win.


I have promised myself two things. One: never give up. I will fight to save her untill the bitter end. Two: try to make every single day as happy as I possibly can for her, just in case…in case we lose.


Clara is strong from the outside but her heart is breaking inside, her feelings for Paul are awaken again, and she dislikes the potent power he has over her even after so long...they were never gone.


„Look at me. I fucked up,“ he rasps. „I know it. I've always known it. But I did love you, and I've never stopped. Hate me for leaving. Hate me for being a dick. But don't hate me because I didn't love you.“


So, in the darkest hours when Paul says:


Even after all these years he's missed out on everything...I believed him.
The second chance they both got was because of that little girl's dying wish, because of her desperate search that was far from a desperate attempt in the first place.


This kid could give a lesson in strength. I could see what Neena meant when she said she was afraid to die. I don't think she meant she fears the actual act – at least not entirely – but she fears its aftermath. She's afraid of what dying will do to the people she loves. She's afraid of what will happen to her mother when she's gone. She's the strongest kid I have ever met – strongest person for that matter.


Every moment could be the last one. Every breath is precious. Every single word counts as forever. Every thread of a dream is a possibility of an immortality in the lives that go on... 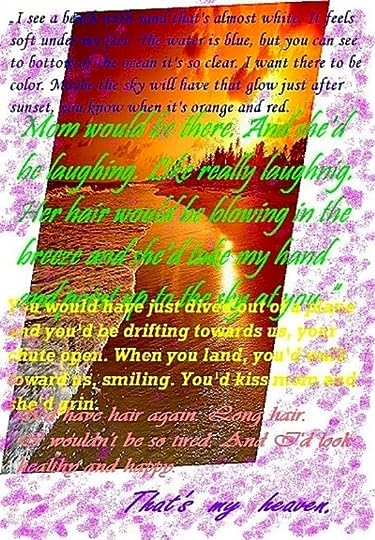 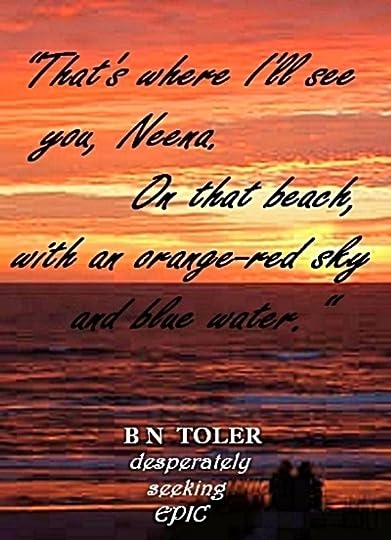 I can't really shorten this experience, I can only try to present the depth of the events that went on in this story. Even when they finished one journey too early it went on on a deeper, higher level...

I loved Clara. She was a truly remarkable heroine. A true heroine. A mother. A fighter. Even when the obvious was not the real thing presentable her strength was undeniable and unmistakable.


„I know Paul was the adventurer…the fearless risk-taker. I know they joked how you never jumped, but if you think about it…you did.“
„You left your home and moved to a different state, taking on a job you knew nothing about. You bought a house on your own; fixed it mostly on your own. You had a baby as a single woman. It may not be jumping out of planes, but it sounds like one hell of an adventure to me.“
„You're pretty badass, Clara“


Paul redeemed himself in my eyes towards the end. He was a complete person even if he had to acknowledge the fear, the unjust, the unfairness, the helplessness, the despair...he found himself through the role he never imagined was possible for him.


I never imgined I could find such peace in this type of life. I never imagined feeling like a family would satisfy me. But it does. It's everything. They are everything. And that's what I tell them when I whisper, „Everything that matters is right here in my arms.“


Neena – the most difficult part of the story to read about and yet the most beautiful one. The way this girl was portrayed made my heart burst in so much emotions, I can't even begin to describe. She was the guiding light, she was the strenght, she was the force within and the most precious gift.


„You were a gift, something I thought I'd never have. You are by far my greatest accomplishment, Neena. I'm honored to be your mother. It's been my greatest privilege. Thank you for being more than I could have ever hoped for. Thank you for the joy and laughter you have brought into my life. Thank you for the kisses, the tickles, and hugs. I'm so proud of you, of who you are. I love you so much, baby.“


It's one of those moments, and I know I'll never forget. I wish I could freeze it, or somehow box it; trap it so we never lose it. Here we are, with our friends and our daughter. Our daughter is sick, weakening before our very eyes, and she's laughing. How many more might we get? I'd give anything to see that smile forever. I've missed a lifetime of these moments…her lifetime of moments.
I stood and looked down at my daughter. She was mine. She was the best of me.
„You are my most epic adventure, princess.“ 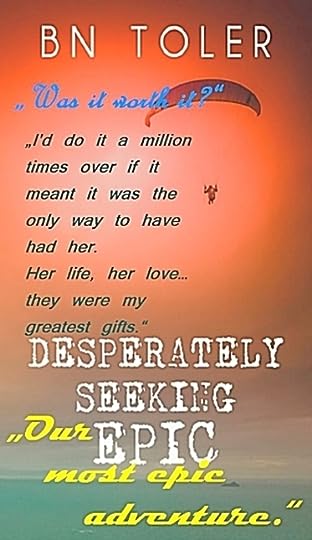 "Remember...no good-byes...
There's only see you later. And untill we meet again."


This moment. With my daughter who is smiling.

„Life is too short to be subtle.“

LIVE bold. LIVE fully. LIVE in each and every single MOMENT.


HIGHLY EXPECTED READ by one of my FAVORITE authors!!! And I got MORE than I hoped for.

BR with my guuurl DENISE

View all my reviews
Posted by Snjezana (Snow) at 3:17 PM